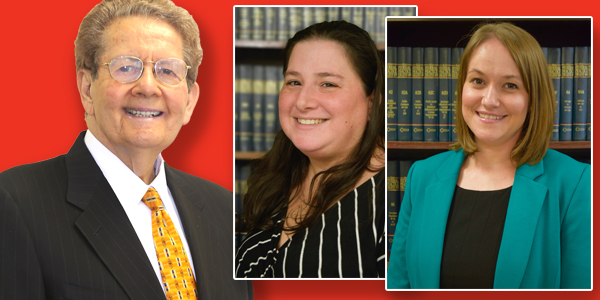 Washington, DC—Thanks to the wonderful generosity of renowned D.C. malpractice attorney Jack H. Olender, the UDC David A. Clarke School of Law is proud to report a significant expansion in the capacity of both its Immigration and Human Rights Clinic and its Legislation Clinic to serve low-income people and the public interest.

Long a leader in the field of medical malpractice and a fixture, with his late wife Lovell, on the D.C. and national legal, social justice and philanthropic scenes, Mr. Olender has for decades been a fierce advocate for and supporter of the UDC David A. Clarke School of Law. Mr. Olender’s support of the District’s public law school has included the provision of annual recognition – and scholarships – to six top UDC Law clinic students at his Olender Foundation annual Awards Gala as well as significant additional annual financial contributions to the School of Law’s scholarship funds. In addition, years ago, Mr. Olender endowed a scholarship fund in memory of Antioch School of Law graduate Gary Freeman, ’76, whose untimely death occurred during his tenure as an attorney in Mr. Olender’s firm.

Mr. Olender’s support, however, has been more than solely financial – in addition to previously serving on the University of the District of Columbia’s Board, he has devoted decades of service on the DC School of Law Foundation’s Board and, for many years, has hosted Board meetings at his law firm, Olender and Associates, and attended numerous School of Law events. Furthermore, Mr. Olender has placed his faith in two additional School of Law alumni, attorneys Lesley Zork, ’88, and Joshua Basile, ’13, who currently work for his elite law firm.

This fall, as a result of a transformative donation by the Jack and Lovell Olender Foundation, the School of Law has added outstanding professors in two clinics, and has conferred the title of “Jack and Lovell Olender Director” upon the directors of each clinic. Thanks to the Olender Foundation’s support, both clinics will be able to expand the breadth and depth of their service and training.

Professor Kristina M. Campbell is the Jack and Lovell Olender Director of the Immigration and Human Rights Clinic at the UDC David A. Clarke School of Law. Professor Campbell is now assisted by an outstanding lawyer and activist, Assistant Professor Lindsay M. Harris, one of the newly funded professors.

Associate Professor Marcy Karin, the Jack and Lovell Olender Director of the Legislation Clinic at the UDC David A. Clarke School of Law, is the second newly funded professor. Professor Karin will be ably assisted by another outstanding young lawyer, Clinical Instructor Monica Bhattacharya. In addition, Professor Laurie Morin will direct her new Gender Justice Project in collaboration with the Legislation Clinic.

The Immigration and Human Rights Clinic

The Immigration and Human Rights Clinic has transitioned from a focus on the nexus between criminal and immigration law, to a focus on representing asylum seekers fleeing violence and persecution. Professor Lindsay M. Harris joined the clinic this academic year after a year with the American Immigration Council working on national efforts to end the detention of immigrant children and their mothers in two large detention centers in Texas. Before that, she taught in the asylum clinic at Georgetown for two years, and also developed and taught an asylum law course at George Mason School of Law. Her experience meshes well with recent Clinic work representing mothers and children released from these detention centers and, in particular, with the work of Olender Clinic Director Kristina M. Campbell who has led two service-learning trips during Spring Break and the summer to Dilley and Karnes City, Texas. In Texas, UDC Law students reported “life-changing” experiences through on-the-ground intensive lawyering work, providing immediate assistance to detained families.

One highlight of the fall semester featured third year students, Leslie Benjamin and Jessica Christy who won their first trial. Under the supervision of Professor Campbell, the students prepared their clients, a mother and daughter detained in Texas, drafted declarations and filed a legal brief arguing for asylum relief. The team then traveled to Dallas where they worked with their clients through the weekend in advance of the Monday trial. As a result of their efforts, their clients, who had been unable to find pro bono representation in Texas, were freed from detention.

During the spring semester, Professor Harris, with an able assist from Professor Campbell, spearheaded a day-long conference, held on February 3, 2017, “Chasing Liberty:  The Detention of Central American Families in the United States,” bringing together scholars, advocates and law students to explore how to end family detention practices and effectively address post-release needs for asylum-seekers. This conference pushed the national conversation on these issues forward at a critical time as the new Trump Administration implements its aggressive and confusing new agenda on immigration policy.

Professor Campbell is planning, with Professor Harris’ support, to lead a third trip to family detention centers with ten students during Spring Break 2017 as part of the School of Law ’s Service-Learning Program.

Under the leadership of Professor Marcy Karin, Jack and Lovell Olender Director of the Legislation Clinic, the clinic has been redesigned to offer a seven-credit experiential learning opportunity that combines client representation and the study of legislative lawyering.

The Clinic’s mission is two-fold:

1) To provide UDC Law students with the training, supervision, and field experience necessary to become effective and reflective lawyers.

2) To undertake projects advancing the public interest and providing quality representation to organizations in the District in need of legislative lawyering services.

During the fall semester students worked on policy projects for non-profit and community organizations that are working to lift vulnerable populations out of poverty with improved economic security and workplace protections as well as access to other civil rights. The inaugural class of the redesigned Legislation Clinic undertook a wide range of legislative lawyering work on both the local and national level.

On behalf of the Network for Victim Recovery of DC, students researched methods of reimbursement for expenses related to crimes committed in the District. Clinic students also volunteered with the Lawyers’ Committee’s Election Protection program, assisting callers in four states on a range of questions related to the voting process, including registration, early voting, problems with polling locations and machines, access to interpreters and voting assistants, provisional ballots, and a chilling amount of potential voter intimidation. These calls primarily dealt with state laws interpreting the federal right to vote. 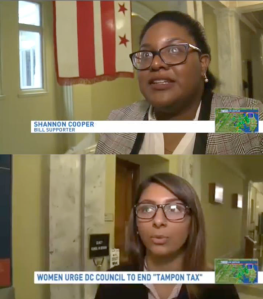 The Clinic successfully represented BRAWS (Bringing Resources to Aid Women’s Shelters) in local efforts to support the repeal of the “tampon tax.” On November 15th, the D.C. Council passed Bill 21-696, the Feminine Hygiene and Diapers Sales Tax Exemption Amendment Act of 2016, which was signed into law by D.C. Mayor Muriel Bowser on December 8th. Earlier in the semester, students prepared oral and written testimony for a D.C. Council Committee on Finance and Revenue. Professor Karin and clinic students testified in front of the D.C. Council and two students, Shannon Cooper and Aysha Iqbal, were featured on WJLA TV. Students engaged with the media, developed a social media campaign in support of the testimony and broader efforts, and prepared materials for a grassroots outreach campaign in the DMV area to support the repeal of the “tampon tax” in D.C. and Virginia.

On the national level, the Legislation Clinic is working with disability rights advocates to improve enforcement of the Americans with Disabilities Act as amended by the ADA Amendments Act of 2008. Originally enacted in 1990, the ADA is a comprehensive civil rights law that prohibits discrimination on the basis of “disability” in private employment, places of public accommodation, and government benefits and services. Despite the ADA Amendments Act’s goal of ensuring broad coverage for access to these protections, some confusion remains over the application of the revised definition of disability, which causes a threshold definitional issue for many individuals seeking to use the ADA’s protections. The Clinic is working with a team of advocates to educate individuals with disabilities and their counsel regarding the ADA’s amended definition of disability.

The Legislation Clinic is also working with Young Invincibles, a national organization working to elevate the voices of millennials into the national policy conversation and to engage them on the most pressing issues facing their generation, such as higher education, jobs, and health care. The Young Invincibles’ student attorney team is preparing an issue brief on the state of internships in 21st-century America, including a survey of relevant labor standards, other laws and public policy.

Finally, on behalf of clinic clients while working on this robust docket, students have participated in coalition meetings, calls, and events with a broad range of D.C. stakeholders. Students have been on the phone or in the room with members and staff of the D.C. Council and staff of both Houses of Congress, the White House Council on Women and Girls, the former First Lady’s Office, the U.S. Department of Labor, and the U.S. Equal Employment Opportunity Commission, among others.

Beginning in January of 2017, Professor Laurie Morin is developing and coordinating the Gender Justice Project in collaboration with the Legislation Clinic to bring together students, professors, and activists to find multi-disciplinary solutions to local and global problems at the intersection of gender, sexual orientation, race, and economic status. The Project will sponsor courses, conferences, round-tables, and other events to facilitate dialogue and action on these issues.

The Project and Clinic will work with non-profit organizations and community groups to combat gender inequities using a wide array of strategies, including public policy development, legislative drafting, lobbying, community organizing and non- violent protest, public education, media outreach, and impact litigation. The Project will also partner with other law school clinics on cases and issues of mutual interest.

Professor Morin is also co-founder of the School of Law’s Service-Learning Program, in which faculty members and students travel together to parts of the country that need legal assistance to recover from natural and man-made disasters. She has accompanied students on service- learning trips to New Orleans to provide services to survivors of Hurricane Katrina; Mississippi to provide legal services in the wake of the BP oil spill; and Texas to assist women and children refugees from Central America who were detained at the Karnes Detention Center.